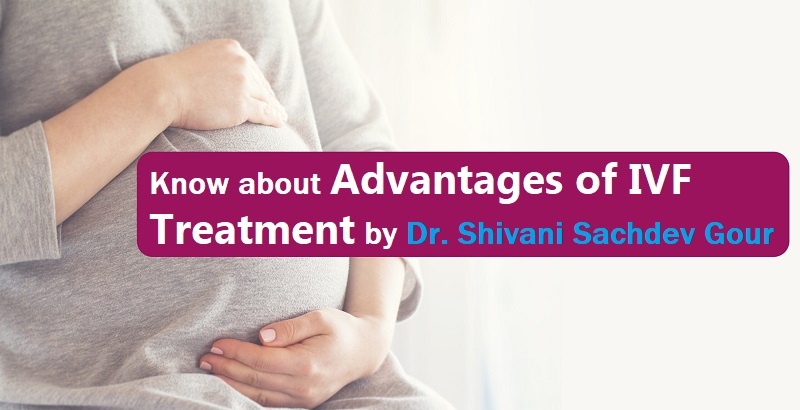 Every couple aspires to become parents at some time in their lives, but many are prevented from this bliss for various reasons, most often medical ones. IVF helps patients conceive a child who would not otherwise be able to get pregnant. The benefits of IVF treatment are vast. Having a successful pregnancy and a healthy child is IVF’s biggest benefit.

The following are some of the advantages of IVF treatment.

Anyone Can Utilize IVF

In-vitro fertilization can be used by gestational or surrogate carriers and the baby’s mother, allowing a greater spectrum of people to become parents. IVF can be a fantastic alternative for single women or same-sex couples trying to get pregnant if IUI hasn’t worked. Using donor sperm during IVF can help prospective patients do this. Anyone can fulfill their dream of becoming a parent with the help of IVF treatment in Delhi.

Donor Eggs And Sperm Can Be Used In IVF

It’s possible that expecting parents won’t always be able to generate healthy eggs or sperm. Therefore, couples struggling with infertility can use donor sperm or eggs during IVF to have a child. In such circumstances, the egg can be manually fertilized in a medical setting, and the viable embryo produced can be used for IVF to improve your chances of conceiving the first time or the second time.

Reduce Your Risk of Miscarriage

Miscarriages are most commonly caused by genetic problems that force the body to terminate the pregnancy on its own. PGT can be used with IVF to evaluate an embryo’s genetic viability beforehand, increasing the likelihood of a successful pregnancy. Choosing the best IVF clinic in Delhi NCR for effective IVF therapy lowers the risk of miscarriage.

Chromosome abnormalities are more likely to affect females. It produces embryos with genetic flaws, which may result in early termination. Genetic disorders that run-in families can be eliminated with IVF. IVF allows for pre-implantation genetic testing (PGS). Prior to fertilization, PGS is essential for the genetic profiling of embryos.

This procedure aids in the embryo’s efficient screening. By doing so, the child’s chances of inheriting a chromosomal problem or genetic abnormalities are minimized. Thus, prospective parents don’t have to be concerned about passing on any hereditary diseases to their offspring.

The best chance of success and the least likelihood of multiple births of any assisted reproductive technique is an IVF cycle with one embryo followed by the second cycle of frozen embryo transfer. Even if IVF treatment doesn’t work the first time, it can still be tried again for the second time.

Compared to other assisted reproductive methods, such as IUI, it has one of the highest success rates. Having the best IVF doctor in Delhi on your side increases the procedure’s success.

Pregnancy At the Preferred Time

IVF can help a woman achieve her long-term objective of preserving her fertility. Most spouses have challenging occupations. As a result, when couples start their intention to have children, the body cannot support it biologically.

If a person wants a child later in life, they can employ IVF treatments. Cryopreservation is a method that can be used to preserve eggs or embryos for later use. Additionally, you can pick the time during which you desire to become pregnant.

Through IVF, people who struggle with infertility can successfully grow their families. Additionally, it allows you to choose when you want to get pregnant. IVF has several benefits, and couples considering the procedure are advised to select the best IVF doctors in Delhi for positive outcomes.