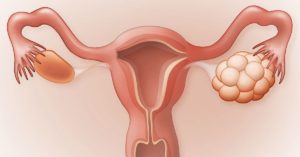 Polycystic ovary syndrome (PCOS) is the most common reason for infertility in women. It is a common health problem caused by an imbalance of reproductive hormones. The hormonal imbalance creates problems in the ovaries. As its name implies, it is a hormonal where numerous small cysts are formed in ovaries.

Though there are no clear symptoms of PCOS but some signs are there that can predict about PCOS.

Although the exact causes for PCOS are unknown, but results of a hormone imbalance caused by PCOS has deep impact in women’s brain and ovaries. A main underlying problem is a hormonal imbalance. The ovaries of women with PCOS produce more androgens than normal. Androgens are male hormones, but women also produce them in a limited amount.

PCOS is one of the most common, but treatable, causes of infertility in women. In women with PCOS, the hormonal imbalance interferes with the growth and release of eggs from the ovaries (ovulation), and without ovulation there is no possibility of getting pregnant.

PCOS can affect a women’s fertility in different ways.

Due to unbalanced hormones, ovulation and menstruation can be irregular. Unpredictable menstrual cycles can also make it difficult to get pregnant.